Three weeks ago I was at Kenyon College in the village of Gambier, Ohio, attending Beyond Walls, a writer’s conference for clergy. There were 84 ministers, priests, chaplains, rabbis, and spiritual directors from Australia, and Canada, and 23 American states. Our teachers were poets, novelists, editors, bloggers, and journalists. It was a celebration of spiritual writing, and a chance to explore possibilities outside the writing we normally do.

It was like summer camp for ministers, without actually having to camp. We stayed in furnished, air-conditioned student apartments, enjoyed meals in the faculty dining room, and had the use of several wonderful libraries, walking trails, bike trails, and the fitness centre.

A path behind the fitness centre leads to the 14 mile Kokosing Gap Trail. This is a repurposed rail line, paved for recreational use, cutting through the forest at the south end of the village.

(This is Rabbi Jamie on the left, cycling in Colorado)

Early one morning I cycled the trail with another “camper’, Rabbi Jamie, who writes children’s stories, and is working on a novel. We talked about writing as a way to connect with people who might never come to a worship service.  Jamie is younger than me, so I kept him chatting, so I could keep up with him. He lives near Denver, Colorado, and I think the altitude gives him an aerobic advantage.

As Jamie and I pedaled along, we saw ahead of us a mother deer and two fawns, using the trail as a kind of forest express route. We hushed our voices, and coasted quietly behind the deer, until they veered off the pavement, and up a hill into the cover of foliage. The deer were a wondrous reminder of the vibrancy and variety, and beauty of life in the world beyond streets and buildings. They emerged ahead of us on the trail two more times that morning. Each time was a blessing.

Rabbi Jamie and I are both interested in the experience of the holy, what some call the “numinous”. According to Rudolf Otto, a German Lutheran writer from the early twentieth century, the numinous is the most honest religious feeling. You might call it a sense of the holy, an awareness of something really important that is greater than us.

This is not religious in the sense of the rules or teachings of one religion or another. This is the more basic experience, the gut feeling. We may encounter it during the ritual and solemnity of a worship service. I have felt it in worship here on a Sunday morning. I felt it at a Friday evening Jewish Shabbat Service held in the pub at Kenyon College. I felt it a few years ago in morning prayer with the monks at a Cistercian monastery in South Carolina.

We may sense the holy in a place of worship, even when no one else is there. Some places feel soaked with prayer. I remember sitting on an old wooden bench in the worship room at a Quaker retreat centre in Pennsylvania, and feeling the tension in my back release. It was a good, solid place to rest, in the knowledge that God is there. I remember feeling awe while standing atop a Mayan pyramid in the jungle, in Belize.

Awareness of the holy may come as a gentle tide that brings a deep feeling of tranquility. It may come in a thrilling rush, overwhelming while it lasts. It may burst up from the depths of your soul so powerfully that it actually shakes and moves you physically.

I have read about Sufi masters, whirling dervishes who spin and dance until transported, not so much to a different place, but to a different way of seeing what is around them. They find themselves in the presence of the holy.

Maybe that’s how it was for a lonely shepherd tending to his father-in-law’s sheep. He saw something strange. A bush seemed to be on fire, but was not burning up. As he approached he heard a voice calling, “Moses! Moses!”

“Do not come any closer,” God said. “Take off your sandals, for the place where you are standing is holy ground.”  Then he said, “I am the God of your father, the God of Abraham, the God of Isaac and the God of Jacob.” At this, Moses hid his face, because he was afraid to look at God.”

We are making our way through the Lord’s Prayer. The third line is “Hallowed be thy name”.  We recognize the word “hallowed” from Hallowe’en. It sounds supernatural or frightening. Moses was scared, but not in a bad way, when he approached the burning bush.

Hallowed is an archaic word meaning “to honour as holy”. I am glad we kept the old word in our translation of the Lord’s Prayer. It retains a sense of mystery.  Hallowed means we recognize God is holy, an overwhelming presence, that can surprise us, call us out of our normal way of seeing and being, to awareness there is more to life than we normally see or imagine.

When we repeat the Lord’s Prayer we tend to fly past the word hallowed without savouring what it tells us- that God is big and strange, wild, untameable, like a whirlwind, or a bush that burns without being consumed.

Moses’ encounter with the holy changed his life. He abandoned a largely solitary existence, to start a movement. He organized the people of Israel, who were slaves doing hard labour in Egypt, under the pharoah’s whip. He led them out of Egypt, towards a land where they built new lives. When asked where he got his authority, he said it was from God, known as “I am who I am”.

Life-changing encounters with the holy happen every day, and not always in deserts or lofty places. An historical marker on a street corner in Kentucky has become a pilgrimage site for people from all over the world. It marks the spot where Thomas Merton, perhaps the most famous Western mystic of the twentieth century, experienced a revelation. It did not turn him into a revolutionary in the manner of Moses, but it did crack his heart open to see God in everyone around him. He described it this way;

“In Louisville, at the corner of Fourth and Walnut, in the center of the shopping district, I was suddenly overwhelmed with the realization that I loved all those people, that they were mine and I theirs, that we could not be alien to one another even though we were total strangers. It was like waking from a dream of separateness, of spurious self-isolation in a special world, the world of renunciation and supposed holiness… This sense of liberation from an illusory difference was such a relief and such a joy to me that I almost laughed out loud… I have the immense joy of being man, a member of a race in which God Himself became incarnate. As if the sorrows and stupidities of the human condition could overwhelm me, now I realize what we all are. And if only everybody could realize this! But it cannot be explained. There is no way of telling people that they are all walking around shining like the sun.” (Conjectures of a Guilty Bystander) 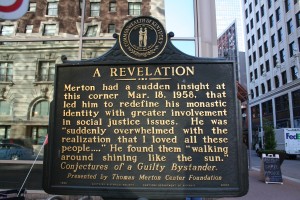 I think every human being is made with a longing to connect to the Holy, and to the Holy within each other. I have heard it described as the God shaped hole in our heart, which yearns for meaning, hope, connection to something beyond ourselves. This is the part of us that most longs for intimacy with God. It is a tender place within ourselves. I think for many people, access to this yearning comes at times of vulnerability rather than at the times when we feel strong and confident.

Moses was alone with the sheep in the wilderness, and saw something mysterious, that made no sense, and should not have been there. It may have jarred him, reminded him that there is more to our existence than what we can understand or control.

Thomas Merton was in downtown Louisville, running errands for the monastery where he trained novice monks, and where he had been living for the previous 15 years. He’d gone to the monastery looking for a place to pray and find God, outside the rush of the world, away from the noise of people. He saw as if in a flash of bright light that there really is no place that is away, and that God is present everywhere, and in and with every person.

God is holy, and all that God has made, and is making is holy. Hallowed.

This past week my friend Sam Persons Parkes passed on a quote from that famous Canadian theologian, Anne of Green Gables, who said, 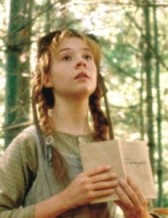 “Why must people kneel down to pray?” If I really wanted to pray I’ll tell you what I’d do. I’d go out into a great big field all alone or into the deep, deep, woods, and I’d look up into the sky–up–up–up–into that lovely blue sky that looks as if there was no end to its blueness.

And then I’d just feel a prayer. “  Amen