A place to read things I write
Leave a comment 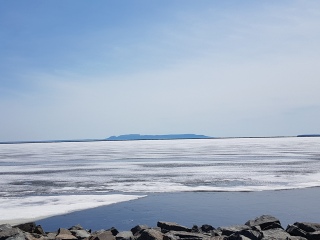 This the Sleeping Giant, part of the Sibley Peninsula that juts out into Lake Superior. I snapped this shot a week after Easter, while I was back in Thunder Bay for a family gathering. It was a beautiful morning, a celebration of sun and sky, water and ice, and the slow arrival of spring.

Growing up in Thunder Bay, I knew the Ojibway story that the sleeping figure guarding the bay is that of Nanabijou. He is  descended from a human mother and a spirit father, and could appear in animal or human form. He was a powerful trickster, who laid down in the lake and was turned to stone during a violent thunderstorm, to block access to a secret tunnel that led to a rich lode of silver. Most cultures have stories about the direct involvement of the Divine with this world, and with us.

The themes of today’s chapter from Richard Rohr’s latest book “The Universal Christ” reminded me of the beauty of this world, and it’s essential goodness. Here are the lines I chose to share:

…once we become aware of the generous, creative Presence that exists in all things natural, we can receive it as the inner Source of all dignity and worthiness.

Don’t start by trying to love God, or even people; love rocks and elements first, move to trees, then animals, and then humans. Angels will soon seem like a real possibility, and God is then just a short leap away.

God did not just start talking to us with the Bible or the church or the prophets. Do we really think that God had nothing at all to say for 13.7 billion years, and started speaking only in the latest nanosecond of geological time?

…in the mid-nineteenth century, grasping for the certitude and authority the church was quickly losing in the face of rationalism and scientism, Catholics declared the Pope to be “infallible,” and Evangelicals decided the Bible was “inerrant,” despite the fact that we had gotten along for most of eighteen hundred years without either belief. In fact, these claims would have seemed idolatrous to most early Christians.

Creation—be it planets, plants, or pandas—was not just a warm-up act for the human story or the Bible. The natural world is its own good and sufficient story, if we can only learn to see it with humility and love.

The true and essential work of all religion is to help us recognize and recover the divine image in everything.

…this picture was complicated when the concept of original sin entered the Christian mind. In this idea—first put forth by Augustine in the fifth century, but never mentioned in the Bible—we emphasized that human beings were born into “sin” because Adam and Eve “offended God” by eating from the “tree of the knowledge of good and evil.”

…after Augustine, most Christian theologies shifted from the positive vision of Genesis 1 to the darker vision of Genesis 3—the so-called fall, or what I am calling the “problem.” Instead of embracing God’s master plan for humanity and creation—what we Franciscans still call the “Primacy of Christ”—Christians shrunk our image of both Jesus and Christ, and our “Savior” became a mere Johnny-come-lately “answer” to the problem of sin, a problem that we had largely created ourselves.

The shift in what we valued often allowed us to avoid Jesus’s actual life and teaching because all we needed was the sacrificial event of his death.

…the teaching of original sin started us off on the wrong foot—with a no instead of a yes, with a mistrust instead of a trust.

We end up with a Jesus who was merciful while on earth, but who punishes in the next world. Who forgives here but not later. God in this picture seems whimsical and untrustworthy even to the casual observer. It may be scary for Christians to admit these outcomes to ourselves, but we must. I believe this is a key reason why people do not so much react against the Christian story line, like they used to; instead, they simply refuse to take it seriously.

The Christian story line must start with a positive and overarching vision for humanity and for history, or it will never get beyond the primitive, exclusionary, and fear-based stages of most early human development. We are ready for a major course correction.

Most of us know that we can’t afford to walk around fearing, hating, dismissing, and denying all possible threats and all otherness. But few of us were given practical teaching in how to avoid this. It is interesting that Jesus emphasized the absolute centrality of inner motivation and intention more than outer behavior, spending almost half of the Sermon on the Mount on this subject…

From the very beginning, faith, hope, and love are planted deep within our nature—indeed they are our very nature…

In every age and culture, we have seen regressions toward racism, sexism, homophobia, militarism, lookism, and classism. This pattern tells me that unless we see dignity as being given universally, objectively, and from the beginning by God, humans will constantly think it is up to us to decide.

We must reclaim the Christian project, building from the true starting point of Original Goodness. We must reclaim Jesus as an inclusive Savior instead of an exclusionary Judge, as a Christ who holds history together as the cosmic Alpha and Omega.

← Meditation on wheels
Mindfulness, and the secret lovely toad →