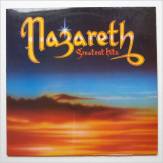 N is for Nazareth, a town in Galilee. Today we consider the problem of Nazareth. (The town in ancient Israel, not the Scottish hard rock band from the early 1970’s!)

The Nazareth question is a kind of gateway to considering some questions scholars have wrestled with for at least 100 years of reading the Bible with the critical eyes of academics, , as well as with hearts of faith.

After the destruction of the Jerusalem Temple by the Romans in the year 70 (3-4 decades after Jesus’ death), Jewish leaders clamped down hard on the Jesus followers. There was bitterness and name-calling, reflective of the tension between the traditional followers of Judaism, and Jewish Christians, who had begun to claim that Jesus was the long-expected Messiah.

A major challenge to the Messianic claims about Jesus was that he came from Galilee, which lay in Gentile territory. Hebrew scriptures said the Messiah would be of David’s line, and come from Bethlehem in Judea. Nazareth was a backwater village, and the butt of many jokes. John 1:46 quoted the insult frequently thrown at Christians: “Can anything good come out of Nazareth?”

Scholars have hypothesized about how Matthew and Luke worked with the raw material, the stories that had been collected about Jesus, to deal with the “Nazareth problem”.

Matthew described Joseph and Mary and the baby living in a house in Bethlehem (the city of David) when the Magi came bearing their gifts. (There is no visit by shepherds in the Matthew version of the story.) This information served to link Jesus to the family line of King David, bolstering the claims of his followers that Jesus was sent to become another great king.

The reference to a house in Bethlehem opened up another issue- how and why did the holy family end up in Nazareth, as it was common knowledge that this was where Jesus grew up?

Scholars suggest Matthew included the story of Herod’s slaughter of the innocents, as a pretext to have the family flee to Egypt. (There is no historical record, outside of Matthew’s Gospel, that Herod, a client king in service to the Roman Empire ever ordered such a horrible thing.) Having the Holy Family flee to Egypt deftly connected Jesus to the story of the first Joseph (his earthly fathers namesake), who was taken by force to Egypt, and rose to a place of power second only to the Pharoah. (An early “rags to riches” tale.)

The Egypt connection also identified Jesus with Moses- which allowed Matthew to use his version of the Jesus story to tell fellow Jewish Christians, a persecuted minority, that God would protect and save them, even as Joseph protected his people in the story from the Book of Genesis, and Moses led the people of out of slavery in the Exodus story. Matthew wrote that Joseph kept the family in Egypt until he heard that Herod had died- but because Herod’s brother succeeded him, Joseph hid his family in Nazareth.

Luke began his story with Joseph and Mary in Nazareth, but used the plot device of the census to get them to Bethlehem. (Historical records indicate that Rome ordered a census in Palestine several years after Jesus’ birth, but there is no evidence Jews returned to their hometowns to be counted.)

Luke provided his own version of a geneaology that also linked Jesus to David, through Joseph. (The family tree Luke offers is not all the same as the one found in Matthew.) Luke followed the nativity story with a description of Jesus’ family going to Jerusalem for purification rites in the temple, and then returning to Nazareth, where Jesus was raised. In Luke, Mary was presented as the faithful woman, obedient to God, who would help God renew the covenant between God and the people, and open it to Gentiles as well as Jews.

In Luke’s story, there is no visit by magi from the East. The ragged unclean shepherds who visited the new-born Jesus represented the poor who would be lifted up, as the rich were to be brought low, as Mary sang in her song of praise to God upon learning that she would bear a child. (There are strong parallels to Hannah, the faithful woman who had been barren, and when by some miracle became pregnant, dedicated her child to God’s service. Hannah’s song in 1 Samuel is clearly the model for Matthew’s poetic rendering of Mary’s Song.)

The writers of the Gospels of Matthew and Luke took up the task of communicating the meaning, and the significance of Jesus’ life, to different audiences. Did they expect that their stories would be bound in the same volume to be pored over by biblical scholars, who use the differences in the way they told their stories to gain clues about the “story under the story”?

The Advent Alphabet is a ministry offering from Rev. Darrow Woods, pastor at the United Church in Harrow, Ontario. Each day in Advent, a different letter of the English Alphabet will be a jumping off place for a reflection. These reflections will be sent out via email to those who have asked to be on the mailing list, and will also be posted to Rev. Darrow’s Facebook page.