Before we go further, let’s remember that God loves us, and through Jesus we know that there are no barriers to God’s love, and God’s forgiveness. If you feel a need to, offer a prayer asking God to forgive the thing you just remembered, about hurting someone else. If you have not already done so, and need to, you may want to make a plan for how to reconcile with that person.

Now, take a moment and remember a time in which you were the one on the receiving end- when something that was said or done caused you upset or hurt.

Have you been able to be reconcile with the person who hurt you- or their memory? Some of our hurts may go back so far that the person who caused them may no longer be around. Have you forgiven the person? Are you still working on forgiving them?

Forgiveness is not always easy.  It’s important to recognize that we may have to work at it, and that it may come in stages, or in layers, depending upon how deeply we were hurt, and how far back the memory goes.  Reaching the point at which we feel that we have forgiven someone may actually come long after we have made the choice, the decision to forgive.

Like most things that are worth doing, forgiveness takes work, and practice. It may take a while before we get good at it. There are times, though, when it comes miraculously quickly, as if we have been given a tremendous gift. 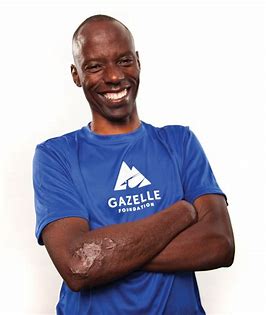 I want to tell you about a man named Gilbert Tuhabonye. Gilbert was the third of four children born into a farming family that was part of the Tutsi tribe in the southern county of Songa, in Burundi.  From an early age, it was clear that Gilbert was born to run. Whether he was chasing his family’s cows, fetching water, or making the five mile trek to school, he loved to run everywhere.

After 6th grade, Gilbert had to leave home to attend a boarding school 150 miles from the family farm. At the Kibimba school he began running competitively. In his first year he won an 8k race while running barefoot. In his second year he caught the eye of a coach who taught him proper running technique, and encouraged him to train hard, and aim for the Olympics.

As an 11th grader, Gilbert became a national champion in the 400 and 800 metre races. By his senior year Gilbert was on track and headed towards a scholarship to a US school, with the goal of getting an education, and returning to his home in Burundi.

One terrible afternoon in October 1993 life changed dramatically for Gilbert, and many others in Burundi. The historic tribal conflict between the Tutsis and the Hutus erupted into horrific violence, and overtook the school. The Hutu students at the school, with their parents, some teachers, and other tribe members forced the Tutsi students and their teachers into a room in which they were beaten, and left to be burned to death.

Gilbert was badly hurt, but somehow survived. He spent 9 hours in the smouldering room, working his way out of the piled bodies, and managing to break through a window with a charred bone. He jumped free of the burning building and ran into the night, with 3rd degree burns on much of his body, machete wounds, and a twisted leg. He survived, while 249 others died.

Gilbert recovered from his injuries, returned to running, and received a full athletic scholarship to Abilene Christian University. He won several national titles as an NCAA runner, and is now a teacher and coach in Austin, Texas. He runs a program called Gilbert’s Gazelles, and has started the Gazelle Foundation, which raises money for development work back in his home country of Burundi. He focuses on creating supplies of clean water where Hutu and Tutsi people alike can meet, and talk, and get the water they need to live.

I heard an interview with Gilbert. He described being discharged from the hospital, and realizing that the people who killed so many of his friends, and tried to kill him, were still walking the streets.  One day he actually encountered the man who had organized the attack on the school. This man had thought Gilbert was dead, and was shocked and frightened to see him. He collapsed at Gilbert’s feet begging for forgiveness.

Gilbert said, “I let him go. Forgiveness is a powerful tool for me. I struggled a lot, and when I let that person go and live free, it was the beginning of everything. And then, I used running to clear my mind. Instead of every day dreaming to get revenge on the people who tried to kill me, instead, I am dreaming to be the best that I can be. “

He went on to say, “Exercise and running is something that has helped me, and I want to teach everybody to enjoy it.” Gilbert gives his students t-shirts that have his motto on the back, “Run with Joy”. I have seen videos of Gilbert training classes of young runners, and even though he is working hard, and working them very hard, they are laughing, and smiling, and finding the joy in life.

I recently celebrated my 60th birthday, and I marked the day by riding my bicycle for 26 miles. That’s the same distance as a marathon. I used to run marathons, but these days I limit my running to 3 or 4 miles at a time. Over the years I have had some good running partners and teachers, and have helped others learn how to run.  Running has taught me a lot about how to be a human being.

When I took up running in my late 30’s, I couldn’t go for more than 2 or 3 minutes without having to stop. I had to learn to start slow, and stay slow, and focus on building up a habit, and building up some endurance. It took months before I could run a mile and not think I was going to collapse. It felt miraculous when I reached the level where I could run 3, 4 or 5 miles, and not really be out of breath.

Two weeks ago I ran in a race in Leamington, a fundraiser for the Hospice, and my pace and time were about the same as the first race I ran in Windsor, more than 20 years ago. So maybe I am really fast 60 year old, or I was just slow when I was younger! What I have learned is that if I want to keep being able to do something, whether it’s running, or writing sermons, or praying, or asking forgiveness, or offering it, I have to keep working at it, even when I might feel like giving up, or sleeping, or watching tv, or maybe eating a donut.

God creates us with the basic tools we need, but we may need to learn how to use them. We may need coaching, and encouragement, and practice, lots of practice, before we do it well. Even when we are growing in our spiritual fitness, there will be times when we would rather not do what is good for us. There are times when we would rather wallow in bitterness or self pity.

Think again about Gilbert, on the street, meeting the man who organized the attack that killed everyone at the school except Gilbert.

I don’t know if the forgiveness Gilbert extended came easy to him. Whether or not that forgiveness came through Gilbert all at once as a miraculous gift, or whether it came after long hard struggle- the point is that it came. Gilbert says that it was faith that made it possible for him to carry on, to run from danger, to build a new life, and to forgive those who had killed all his friends.

Forgiveness can happen. We can forgive, and we can be forgiven. And when forgiveness comes, as it did for Gilbert, and for the man he forgave, it offers the hope and possibility of a brand new life. Thanks be to God. Amen