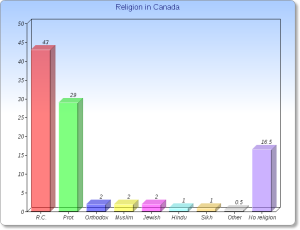 Based on 2001 Statistics Canada figures, if our country was made up of 100 people, 43 would be Roman Catholic.  2 would be Orthodox. 29 would be Protestant. (Of the Protestants, 9.6 would be United Church.)   2 would be Muslim, 1 Jewish, 1 Buddhist, and 1 would be a Sikh. About half a person would represent all other religions.  16 and a half people would have no identified religion.

We live in an increasingly diverse culture.  My children go to school with, and have friends, whose families came from places I had barely heard of, when I was growing up.  All we need to do is go for a walk in a mall, or turn on the television, or spend time on the internet, and we can clearly see that Canada is no longer the uniformly “Christian” country we used to imagine.

In the old paradigm, the approach to other faiths was often what Borg calls absolutist- affirming that Jesus was the only way.  Anyone not a Christian risked going to hell. That provided a powerful incentive to do missionary work, to convert as many people as possible, before it was too late. Figures like Saint Patrick were heroes of the faith for virtually eliminating the pre-existing non-Christian religions in their mission fields.  Borg reports the majority of Christians in North America no longer think this way- even though it is still the party line of some Christian denominations.

I think part of the reason for the decline in the absolutist, “my way or the road to hell” is education. The more we know about other people, and how their cultures have developed, the harder it is to defend the claim that we have all the answers, and everybody else needs to be more like us.

As we relate to people from other faith backgrounds, we are more likely to have our hearts opened. This is what happened in the parable of the Good Samaritan. When the traveller was beaten, robbed, and left for dead on the side of the road, he was ignored and avoided by officials from his own religion, but helped by a stranger, from a different land, who practiced a different faith.

Maybe we are more like the traveller in the parable than we realize. I go to a lot of meetings where people sound pretty pessismistic, and I read a lot of material that suggests that Christian churches in our part of the world are done for. The picture is that we have been robbed of vitality, we continue to bleed members, that we are struggling on the side of the road, while other interests zoom past us in the race to capture the attention of Canadians. There may be some truth to this, but I don’t think that other religions are actually the problem.

My own experience is that I often feel I have more in common with kind people of other faiths, than I do with absolutist and arrogant Christians.  I have fond memories of friendship with a man named Kohtaro, a Japanese lay Buddhist monk. We studied together at a Quaker seminary in Indiana called the Earlham School of Religion. Kohtaro was a good friend, and a kind-hearted soul. We prayed together sometimes. He would sit quietly, chanting the words of a sutra, a Buddhist long prayer, and I would sit in silence, saying the Jesus Prayer to myself. He did not know my words, and I did not know his, but we each knew about the other that we were praying.

My memory of those Buddhist/Christian prayer times came back when I read a wonderful piece by the Roman Catholic Benedictine nun, Sr. Joan Chittister, called “Becoming Prayer”.

When we have prayed prayers long enough, all the words drop away and we begin to live in the presence of God. Then prayer is finally real. When we find ourselves sinking into the world around us with a sense of purpose, an inner light and deep and total trust that whatever happens is right for us, then we have become prayer.

When we kneel down, we admit the magnitude of God in the universe and our own smallness in the face of it. When we stand with hands raised, we recognize the presence of God in life and our own inner glory because of it. All life is in the hands of God. Even the desire to pray is the grace to pray. The movement to pray is the movement of God in our souls. (The Monastic Way, In My Own Words)

Marcus Borg suggests that each of the world’s enduring religions can be seen as sacramental, as helping grow closer to the presence of the holy. Just as the bread and cup of Christian communion are human products, that can point us toward God, religions other than Christianity also bring people closer to their conception of the sacred, the divine. The major religions of the world are different in their origins, their scriptures, the particulars of their religious practice, and their theology, but they also have five basic things in common.

1)     They all affirm that there is something “more”, and that the sacred can be known- “not known completely or exhaustively, but known in the sense of being experienced.”

3)     They all offer practical means to travel on the sacred journey of transformation- practices of worship, rituals and prayer.

4)     With examples of saints, and with explicit teachings, they all “extol compassion as the primary ethical virtue of life. (The Good Samaritan could be Confucian, or Buddhist, or Muslim.)

5)     They all have collections of written words used to pass along their faith.

Borg says the fact that Christianity has so much in common with other major religions of the world actually gives our faith more credibility.  The something “more” that we experience at times, and yearn for at other times, is also known, and sought, by most other human beings on the planet. This can be an encouragement for us to grow deeper in our own faith, to become more mature in our relationship with God.

We don’t have to become scholars of all the world’s religions in order to have a life-giving, transforming relationship with God. The Dalai Lama was once asked by a Christian seeker whether she should become a Buddhist.  Borg paraphrased the answer given by the Dalai Lama. “No, become more deeply Christian; live more deeply into your own tradition.”

If we are living more in the way taught by Jesus, we are in a better position to be respectful of, and grateful for the insights and wisdom of other religions. We can also be better neighbours to people of other faiths, and recognize how they are neighbours to us. We begin to see that sincere people of other faiths are not our rivals, or enemies. They are actually our partners in bringing more people into the way of sacred living.

The whole point of religion is to become more centered in the one to whom our particular tradition points to, in whom we live and move and have our being. As followers of Jesus, we say that it is God. A Jew does the same with the framework of their tradition, as does a Muslim, or a Sikh, or a Hindu.  The differences are so much smaller than what we share in common. As Mohandas Gandhi, the Mahatma once said,

“If a man reaches the heart of his own religion, he has reached the heart of the others too. There is only one God, and there are many paths to him.”

This suggests that the way for us is to dig deeper into our own faith. From the beginning of our exploration of Borg’s book, the Heart of Christianity, we have been hearing him tell us in many ways that the emerging paradigm of our faith is less about having the right ideas in our heads, and agreeing to the correct beliefs, and more about opening our hearts, and living the faith, experiencing it. Borg writes that the practice of faith includes “all the things that Christians do together and individually as a way of paying attention to God. They include being part of a Christian community, a church, and taking part in its life in community. They include worship, Christian formation, collective deeds of hospitality and compassion… devotional disciplines, especially prayer and spending time with the Bible. And they include loving what God loves through the practice of compassion and justice in the world.”

In the weeks following Easter we will begin another series of teaching Sundays, called “Acting Out for Jesus”. They will be based on the lectionary readings from the Book of the Acts of the Apostles, that describe events in the life of the earliest Christian movement after the earthly life of Jesus.  We will look at some of the practices that formed and sustained these early followers, and which can make a difference in our own faith lives today. Amen