On a bright spring morning this May I made a pilgrimage to St. Michael’s Cathedral, Coventry in West Midlands, England. This church, built in the 14th century, had been all but destroyed on the night of November 14, 1940. Luftwaffe bombers dropped incendiary devices all over the city, several of which hit the cathedral.

The official website for St. Michael’s tells the story this way:

Rather than sweeping away the ruins or rebuilding a replica of the former church, inspired by the message of Christ for reconciliation, the then leaders of the Cathedral Community took the courageous step to build a new Cathedral and preserve the remains of the old Cathedral as a moving reminder of the folly and waste of war. From that point, Coventry Cathedral became the inspiration for a ministry of peace and reconciliation that has reached out across the entire world.

Shortly after the destruction, the cathedral stonemason, Jock Forbes, noticed that two of the charred medieval roof timbers had fallen in the shape of a cross.  He set them up in the ruins where they were later placed on an altar of rubble with the moving words ‘Father Forgive’ inscribed on the Sanctuary wall.

The decision to rebuild the cathedral was taken the morning after its destruction.  Rebuilding would not be an act of defiance, but rather a sign of faith, trust and hope for the future of the world.  It was the vision of the Provost at the time, Richard Howard, which led the people of Coventry away from feelings of bitterness and hatred.

Following the destruction of the Cathedral in 1940, Provost Howard made a commitment not to revenge, but to forgiveness and reconciliation with those responsible.

Using a national radio broadcast from the cathedral ruins on Christmas Day 1940 he declared that when the war was over he would work with those who had been enemies ‘to build a kinder, more Christ-child-like world.’

The new cathedral was built alongside the ruins of the old. The cornerstone was laid in 1956, and the new building was consecrated in 1962. The sculptures on the wall are of St. Michael defeating the devil.

The inside of the cathedral is quite beautiful, although in a modernist style that had people shaking their heads in the beginning. There is a huge tapestry of Jesus that overlooks the altar at the very front of the sanctuary.

The cross on this main altar was made of three medieval nails from the original cathedral. The Cross of Nails has become a symbol of the cathedral’s mission of peace and reconciliation. One of the crosses made of nails from the old cathedral was donated to the Kaiser Wilhelm Memorial Church in Berlin, which was destroyed by Allied bomb attacks and is also kept as a ruin alongside a newer building.

There are 160 Community of the Cross of Nails reconciliation centres all over the world, and each place has a cross made from nails from the ruins of the old cathedral. The reconciliation work happens locally in reconciling churches and community groups in England but also in the Middle East and central Africa working with terrorists and dictators as well as local churches, tribes and gangs. 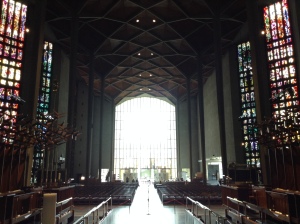 I like the view from the front of the church, looking out to the light of day. Here is what the roof of the new cathedral looks like, from the bell tower of the old cathedral. 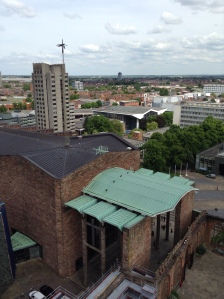 There is a university across the square from the cathedral, and there were a lot of young people out and about while I was there. In the heart of the downtown core, there were a lot of poor people on the streets. I had lunch in a restaurant operated by another local church, that employs former street people, and offers affordable meals and a place to visit.

Several churches in the city are working together in an initiative called “Hope Coventry”. There is recognition that communities, and people, are always in need of rebuilding, and in need of hope.

On this Remembrance Sunday, after the recent deaths of two Canadian soldiers so close to home, we are especially aware of the need for hope, and for efforts like that of the provost of the Coventry cathedral, who committed himself, long before the end of the second world war, to “work with those who had been enemies ‘to build a kinder, more Christ-child-like world.”

This video of the song by JP Cormier, reminds us in a powerful way that it is not only those who are killed in battle that need to be remembered. In his introduction he made specific reference to PTSD, Post-Traumatic Stress Disorder. Cormier reminds us that our remembering has to go beyond just having a day of anthems and flag-waving and laying of wreaths. We have an obligation to stay with, and help these men and women live beyond the extreme conditions, the violence, the inhumanity of war. These things cannot help leave their marks on a person, even as the walls of the old church in Coventry are still scarred and scorched.

While I was in Coventry this spring I was reading the book “Falling Upward: A Spirituality for the Two Halves of Life”, by the Franciscan monk and spiritual teacher Richard Rohr.  In a part of the book in which he was talking about the importance of community in the transforming of lives, he told a story of how in the wake of their defeat in the Second World War, some Japanese villages understood that even as their country was being re-built, there was a need to rebuild the soldiers who were coming home.

They “had the savvy to understand that many of their returning soldiers were not fit or prepared to re-enter civil or humane society. Their only identity for their formative years had been to be a “loyal soldier” to their country; they needed a broader identity to once again rejoin their communities as useful citizens. So these Japanese communities created a communal ritual whereby a soldier was publicly thanked and praised effusively for his service to the people. After this was done at great length, an elder would stand and announce with authority something to this effect: “The war is now over! The community needs you to let go of what has served you and served us well up to now. The community needs you to return as a man, a citizen, and something beyond a soldier.”

Our work to build a better world, to make peace amongst those who have been on opposite sides, and our honouring of sacrifice and dedication must also extend to re-building, not just of physical structures like cathedrals, but of lives. Amen