A place to read things I write
2 Comments

I is for Incarnation

Posted by Darrow on December 4, 2016 in Uncategorized 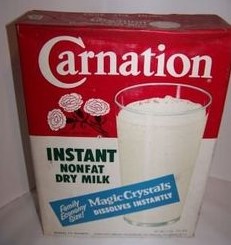 I is for Incarnation. Another name for Christmas is the “Feast of the Incarnation”.

When I was a child, money was tight. My mother prepared milk by mixing water with flakes poured from the red and white box of Carnation powdered milk. On special occasions, like Christmas, she splurged and bought ”real” milk- the good stuff!

Years later, when I began to study theology, it was hard to keep a straight face when the seminary professors spoke of the “good news” of the Incarnation. Growing up, good news meant “no-carnation”- I hated the pale bluish, thin fluid. The manufacturing process began with milk, freeze-dried it, powdered it, and boxed it, to be reconstituted later by well-meaning moms. The result was a literally pale imitation of the real thing.

“Incarnation” comes from the latin for “flesh”- caro. It means that Jesus, is “God in the Flesh”.

There are times I find that idea as hard to swallow as I did the milk mixed from powder. Don’t get me wrong. I believe God sent Jesus to help us understand the incredible depth of love, and compassion that God has for us. I believe God wants each of us to know we are loved, and cherished, and vitally important to God’s hopes and dreams for the world.

But after Jesus’ earthly life, some people who passed on the Good News did not just deliver the message, they “processed” it. They broke it down, and put it back together, packaged as they saw fit. (A bit like the Carnation people do with milk!)

In the process they diluted the message from a call to follow Jesus’ way of actively sharing God’s love and acceptance, to our need to “accept Jesus”, and be saved. I find no evidence in the Gospels that Jesus sought that kind of prominence. Jesus wanted everyone to feel free to approach God with the confidence of a child who knows they are loved, and to pass that love along- to “flesh it out” with our own actions.

I believe we are invited to look at every person, including ourselves as members of God’s family, as our own flesh and blood. All humans are our flesh and blood family, no matter where they live, and what their culture or religion might be.

The powdered milk people have a vested interest in convincing us their product is the best. Well-intentioned followers of Jesus, living in a world of competing religions, made similar claims- that Jesus was the best, and perhaps only way to experience God’s goodness. This has too often de-generated, and been corrupted, and reduced to message that says “God will love you, if you become more like us.”

We understand when an advertiser claims one brand is better than others. It’s the game they play, to capture market share. But this behaviour is offensive when it comes to faith.

I believe the way to follow Jesus, is to offer people the same radical love and acceptance he offered. We begin by acknowledging all people are already God’s people, and our human ideas about who is “in” and who is “out” cannot limit divine love. We should not water down the incredible gift of God’s love. We should share the “good stuff” and proclaim Jesus, who as it says in our United Church Song of Faith,

“ announced the coming of God’s reign—a commonwealth not of domination but of peace, justice, and reconciliation.

He healed the sick and fed the hungry.

He forgave sins and freed those held captive by all manner of demonic powers.

He crossed barriers of race, class, culture, and gender.

He preached and practised unconditional love—love of God, love of neighbour,

love of friend, love of enemy—

and he commanded his followers to love one another

as he had loved them.

The Advent Alphabet is a daily offering of meditations during the Advent Season, from Rev. Darrow Woods of Trinity United Church, in Oakville, Ontario.

2 comments on “I is for Incarnation”