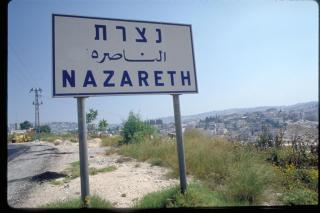 N is for Nazareth, Jesus’ home town in Galilee. But wait, what about that other little town? Why did the gospel writers make a point of telling us he was born in Bethlehem?

The earliest versions of the Gospels from Matthew and Luke were written at least thirty to forty years after Jesus’s death. This was about 70 A.D., around the time Roman forces destroyed the Temple in Jerusalem. In the midst of great upheaval and persecution, the Jewish leaders clamped down on the Jesus followers. There was bitterness and name-calling, reflective of the tension between the traditional followers of Judaism, and Jews who were following the way of Jesus.

A major challenge to the claims Jesus was the Messiah was that he came from Galilee, which was in Gentile territory. Some argued that according to the Hebrew scriptures, the Messiah had to be of David’s line, and come from Bethlehem in Judea.

Nazareth was a backwater village, and the butt of many jokes. John 1:46 quotes the insult frequently thrown at Christians: “Can anything good come out of Nazareth?”

The Gospels according to Matthew and Luke each dealt with the “Nazareth problem” in their own ways, which also served their theological aims.

Matthew provided a geneaology that traced Jesus’ descent from the family of King David. Matthew also described Joseph and Mary and the baby living in a house in Bethlehem when the Magi came to visit. Perhaps as a plot device, Matthew told the horrific story of King Herod’s slaughter of the innocents, which caused the Holy Family’s flight to Egypt. This story connects Jesus to the story of the first Joseph, who was taken by force to Egypt.

Joseph (the heroic figure in the Book of Genesis, not the earthly father of Jesus) had been sold into slavery by his jealous brothers. He rose to a place of power second only to the Pharaoh, and later acted to save his brothers and their families from a terrible famine. The Egypt connection also tied Jesus to Moses, another baby who narrowly avoided genocide at the hands of a corrupt leader.

The author of Matthew’s Gospel wanted to bring hope to fellow Jewish followers of Jesus, a persecuted minority. An important underlying theme in this Gospel is that God protects and saves, even as Joseph protected his people in the Genesis story, and as Moses saved the people from slavery in the Exodus story.

Matthew’s Gospel says Joseph kept the family in Egypt until he heard Herod had died- but because Herod’s brother succeeded him, out of fear, Joseph hid his family in Nazareth.

In the Gospel of Luke Joseph and Mary start out in Nazareth, but the census registration requires them to travel to Bethlehem. (Historical records indicate Rome did order a census in Palestine several years after Jesus’ birth, but there is no evidence Jews would be required to return to their ancestor’s hometowns to be counted.)

Luke provided his own version of a geneaology linking Jesus to David, through Joseph. (It is very different from the family tree in Matthew.)

The escape to Egypt is not part of the story in Luke’s Gospel. In Luke, after Jesus’ birth, the family visited Jerusalem for purification rites in the temple, and returned to Nazareth, where he was raised.

Luke’s gospel has underlying themes of the universality of God’s love, and a call for social equality. Mary is presented as a faithful woman, obedient to God, who will help renew the covenant between God and the people, and open it to Gentiles as well as Jews.

In Luke’s Gospel, the baby Jesus is visited, not by wealthy wise ones from the East, but by ragged, unclean shepherds. They are good representatives of the humble poor who will be lifted up, as the proud rich are brought low, as Mary described in the song of praise we call the Magnificat.

Matthew and Luke used material available to tell their stories about Jesus, with the goal of inspiring faith, and bringing hope to their audience. I don’t know if they intended their stories to be taken literally.

Decades after they were first committed to the page, the Gospels of Matthew, Luke, Mark, and John, as well as other writings of the early church were collected together. It would have been evident then, as it is now, that their stories are not factually consistent.

Some religious scholars say that in this era, 100-300 years after the time of Jesus, people of the Ancient World would not have been caught the same way we can be on the issue of literal accuracy. They would listen to the stories for the truth they contain.

The Advent Alphabet is a ministry offering from Rev. Darrow Woods, minister at Trinity United Church in Oakville, Ontario.